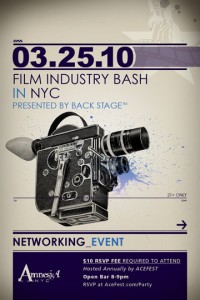 ACEFEST partners-up with Back Stage to produce their 3rd annual Film Industry networking event in Midtown Manhattan on March 25th.

NEW YORK, NY. February 26, 2010 – In the Entertainment business, establishing new connections is vital to one’s success. ACEFEST has taken the traditionally low-key, and oftentimes awkward, environment of networking events and brought it into a nightclub setting.

The Annual Film Industry Bash, presented by Back Stage, will be held at Amnesia Nightclub on Thursday, March 25th from 8pm – 2am. This venue, complete with DJ booth, light kits, state-of-the-art sound system, disco ball, VIP lounge, loaded bar and even rope swings may not be the typical location for networking but that’s exactly what the organizers are going for. ACEFEST has produced this event for 3 years with a sold-out crowd each time. They attribute the party’s success to their dynamic approach to professional interaction. Instead of wine and cheese, think cocktails and dancing. Online RSVP is $10 per person at www.acefest.com/party and is required to attend (generous group discounts applied).

“The Bash’s main objective is to encourage mixing, mingling and networking among actors, filmmakers, producers and agents while developing valuable new relationships with other local industry professionals.”

ACEFEST has always held the most-critical standards when selecting locations for their Film Industry parties each year. The bar was set high with the very first event taking place at the exclusive Soho House in 2008. Last year’s networking party was held at the famed Luxe Lounge inside Lucky Strike Lanes, which added 4 private bowling lanes to the networking equation.

About Back Stage: The Film Industry Bash’s presenting sponsor, Back Stage, has been the most trusted place for actors to find performing arts and casting information for nearly 50 years. Today, the brand signifies something greater than simply a newspaper and a website: Back Stage is a place where actors, singers and dancers can connect with the greater performing arts community.

About Amnesia Nightclub: Improving upon the former Ruby Falls space, Amnesia Nightclub has changed in a beautifully transformative process. Located in West Chelsea, Amnesia combines non-stop energy and entertainment that give guests an experience not felt in New York nightlife.