Sounds obvious, right? Of course you’ll save some money for post! You need a rough cut. You need a fine cut. You need color correction, motion graphics, effects and titles. You need audio cleaning and mixing. Then, when the show is all done, everything looks and sounds great; you are thrilled to see your script has leapt off the page. Your directorial vision has been fulfilled beyond your wildest expectations, but you’re still not done. Now you need a way to present your film to festivals and distributors and nothing less than a kick ass DVD design and package will do. That’s a lot of work to be done, and people like to get paid when they work, so of course you’ll have money to pay them. 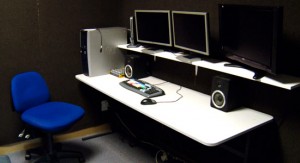 Don't let your project fall apart on the final step!

Well it sounds obvious, but a lot of times it isn’t. At all. I can’t even begin to tell you how many people come to me hoping I will post their project for a lower than a super ultra low budget cut rate because they are broke.

Making a film is a massive undertaking and investment. Getting from point A to point Z takes a lot of time, energy and resources. Unless you are working in full on guerilla style, you can’t do everything yourself. You probably don’t have all the skills, and even if you do, there are not nearly enough hours in the day, week, month or year. You need help. Lots of it. Unfortunately, a vast majority of the time you need to pay people to work for you.

Most writer/director types will do a lot of the preproduction. The good thing is that you can do it over a long period of time, so there’s not usually a million details to deal with in any given week. Then as production nears, maybe you will bring on a producer or line producer to wrangle some of the more difficult details and pick up some of the workload. But most preproduction isn’t rocket science. You need to make phone calls and send emails and nail down simple details about crew, gear and locations. There’s not much you need to know—even as a first time director—to make most of it happen. Doing as much preproduction as you can is good. You save lots of money.

However, when production rolls around, forget it. All that money you saved by doing the prepro doesn’t matter. Take a deep breath, be honest with yourself and admit it—you’re going to be over budget. Something always goes wrong or something gets left out. You forget that the weekly rate doesn’t apply to a piece of gear, or you can’t find cheap meals at a certain location on the day when your cast just happens to be triple the regular size, or you simply forget to include something in the budget that is so obvious you want to beat yourself senseless. No matter what, your money is going to disappear with amazing speed.

But here’s the thing—no matter how much of your budget you spend in production, you still need to do post. Post is intense and time consuming and as much as you want to believe it isn’t the case, good editors, sound mixers and colorists are going to cost money. They are keys, as vital to the project as a good DP.

Here is a story I love to tell, not because it makes me look good, but because it really shows how vital a good editor is to any project. Recently, I recut a feature that a first time director had edited. It looked okay. It sounded okay. He knew how to use the software. He understood the basic principals of editing. What he didn’t know how to do was to add finesse, style and rhythm to the show. He didn’t know how powerful a cutaway or a pause could be when presented at the right time, or how much speeding up or slowing down a scene could add to the drama and tension.

He tried to get his in-laws to watch the film a few times. At ten minutes in, they always came up with an excuse to stop watching—dinner needed to get started or the lawn needed watering. They never said it and probably didn’t even understand it themselves, but the movie just didn’t grab them, even if it looked “okay.” Fast forward a few months later – I was done recutting it, the in-laws sat down, watched the film and really enjoyed it.

I didn’t do “much.” I didn’t reinvent the film or change the story or gut the script. I tweaked the cuts a few frames here or there, changed out some takes for better ones, made some split edits, added some cutaways, shortened a few scenes that had repetitive material, removed one scene that had no real payoff and moved another scene earlier in the show where it had more dramatic impact. The director who did the original cut understood the software and could easily have accomplished all of these tasks, had he been aware enough to see that they needed doing. And this, simply, is the difference between an editor and someone who knows how to edit—not only putting shots one after the next, but assembling them in a way that adds power, energy, tension and drama.

So save some money for post. A great edit, sound mix, graphics package, DVD, etc. are going to give your project the pro shine that it needs. A good DP is only going to get you so far. If the audience doesn’t sit down and get grabbed by the film because the pace is off, the sound is muddy or the color is whacked out, all the money, time and effort expended will be for nothing. Don’t be afraid to invest a little more money to make sure that every part of your vision is fulfilled, not just the production.