Every indie filmmaker has the dream of being that ‘it’ director with that huge breakout film at Sundance. You know the film, you’ve seen it a bunch of times over the last 15 years. It’s shot with loving care by a dedicated crew of visionaries on a shoestring budget supported by credit cards, video store jobs and loans from friends and family, a budget so low that it would make Robert Rodriguez gasp. Everyone sees The Blair Witch Project or one of those other Sundance breakouts like Clerks, Precious, or Reservoir Dogs and says “That made $100 (or $200 or $400…) million? My script is so much better! I could do that!” And honestly, there are a lot of super low budget indie films out there that are great—challenging, meaningful, well acted, and memorable. But let’s face the facts. It is a million to one shot. For every Blair Witch Project that blows up at Sundance, there are thousands of films that get screened in tiny festivals in Upper Michigan for an audience of less than 10, with four of those in attendance being the festival director, projectionist, theater manager and the film’s director.

Ok, so let’s be more reasonable, we’ll dial things back a little and bring our dreams down to earth. After all we don’t want to be greedy and that “one in a million” thing seems a little daunting. How about just getting distribution? That would be great, right? Even if a deal that’s something like straight to DVD, available on Netflix or Blockbuster, something along those lines. Everyone says, “People like indie films, they are a hot commodity right now, surely they’ll want to see mine. It might not have the best production values, but it’s kind of cool and outside the box. Distribution? Of course I can get distribution. That’s a reasonable and attainable goal!” 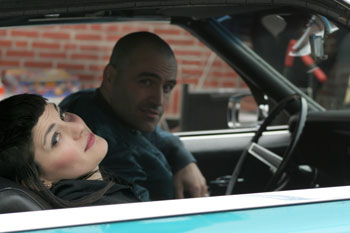 Kelly Diegnan and Sal Rendino in "Across Dot Ave."

I know what these indie filmmakers say, because I am one of them. I said all of those things. In 2007 when I was getting my super low budget feature Across Dot Ave. up and running, I wasn’t thinking, “This is a sure Sundance hit!” Of course, I secretly hoped it could be, but at the same time, I was reasonable and pragmatic enough to know what I was up against—I had no Hollywood connections, no amazing gimmick, no stars, no agent and not much of a budget. But even as a novice writer (well, probably like every novice writer), I had a script I believed in. It has a challenging yet solid and emotional story. It has the kind of characters people can relate to. It has some edge and some humor, a little bit of action and a warm and redemptive ending. In my opinion, the combination of all these elements made it perfect for the indie world. How could I fail? I figured it was a “gimme” that it would do well in festivals and that a distributor would snap it up right away. Boy was I wrong.

Over my next several blogs, I will unfold the long tale of bringing Across Dot Ave. from script to screen, to festivals to pending international distribution, while covering every point in between. It’s been a long road and a true labor of love. As I sit here with the distribution contract on the desk in front of me waiting to be signed— a contract that will take my film across the globe from New York to Italy to India to Japan, a contract that could get my film into Walmarts and Best Buys across the nation— I have to ask myself a really tough question. It’s a question I might never be able to answer—“Was all of this work, time and money spent worth it?”

It seems like the answer would be easy, doesn’t it? Worldwide distribution? That’s a filmmaker’s dream come true! THAT’S GREAT! But things, very often, are not what they seem. In this business or any other, as well as in life in general, always remember the old adage: “Be careful what you wish for, you just might get it.”